Despite inclement weather a large crowd attended Dr Murnanes lecture to the society on Tipperarys Military Barracks.He gave a very interesting account of the various regiments which were based there and the social impact they had on life in the town.He also spoke about the Tipperary Barracks being used as a centre for the rehabilitation of wounded soldiers  during the war and the role of Canon Arthur RyanP.P. in raising funds for this purpose. Canon Ryan was a relative of the Ryan‘s of Scarteen and Emly House.
The society also commemorated Armistice  Day  and relevant poems were recited by Helena Nugent, Ailbe Ryan and Jonas Callanan.These were followed by a rendition of The Green Fields of France and Waltzing Matilda by talented local musician, Sarah Croker accompanied by Sheila Breen. Proceedings ended with some tea and refreshments and further discussions on the many topics raised on the night. 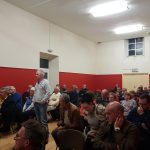