Tuesday 10th July 2018, 8pm, St Ailbe’s Hall, Emly
Emly Historical Society presented a talk on the Annals of Inisfallen by Professor Thomas Charles-Edwards from the Bodleian Library in Oxford University. The Annals of Inisfallen is an ancient manuscript that chronicles the medieval history of Ireland. It is widely accepted that the manuscript was started by monks in St Ailbe’s monastery in Emly, before being moved to other monasteries in the region. It was completed in and is named after the monastery in Inisfallen, near Killarney, Co. Kerry. The Annals contain more than 2,500 entries of daily life spanning the years between 433 and 1450, including weather and monastic activities. It also has many entries on St Ailbe and the monastery in Emly. 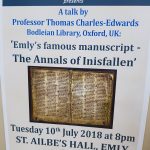 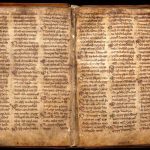