Dr. Catherine Swift from Mary Immaculate College gave a talk to Emly Historical Society on 4th November 2015 .She stated that Emly was the most important church for the Eoghanacht dynasties ruling in Cashel and seems to have been a centre of learning which kept consistent records of deaths of its leaders.

The church in Munster resisted Armagh’s claim to primacy over all Ireland and asserted that Ailbe’s church not Patrick’s should have primacy in Munster. There was much propaganda created around Ailbe to show that anything Patrick did Ailbe did better and even earlier in Pre Patrician times. Dr Swift’s view is that this reflected a rivalry between the Eoghanacht and Dal Cais as Brian’s immediate family favoured Patrick over local saints.

She stressed Ailbe’s Roman connections which were reinforced by the fact that Ailbe’s community appeared to follow the St Augustine/Pope Gregory model of bishops who lived in monastic community. She also showed that the model of rulership at Emly was drawn from Gregory the Great’book on Pastoral Care.

Overall she stressed that the sources relating to Ailbe and the monastery in Emly were second only to those relating to Patrick and Armagh. 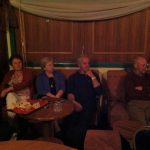 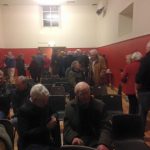